The ‘energy transition’ is profoundly transforming the electricity industry worldwide, at an ever-increasing pace. This process is attracting a lot of attention from industry, policymakers, regulators, investors, entrepreneurs and customers.

There are significant opportunities and risks to be better understood and managed. This transformation is the result of a combination of factors.

Changing business models allow for new players to participate in the energy market, beyond the traditional owners and operators of centralised physical energy assets. The creation of new digital access channels for both providers and customers has prompted the emergence of these new business models, creating more choice in a fragmented market.

Advances in technology have unleashed creative capture-and-delivery mechanisms, such as net metering for electricity surpluses from distributed solar generation. The energy industry provides evidence of these emerging market opportunities.

Estimates from the World Economic Forum point to net economic benefits that could exceed $2.4 trillion from the transformation of the electricity system globally in the next 10 years. This amount includes gains accruing from enhanced reliability, resilience, improved efficiency, and better utilisation of the existing infrastructure assets, not to mention job creation and environmental gains. 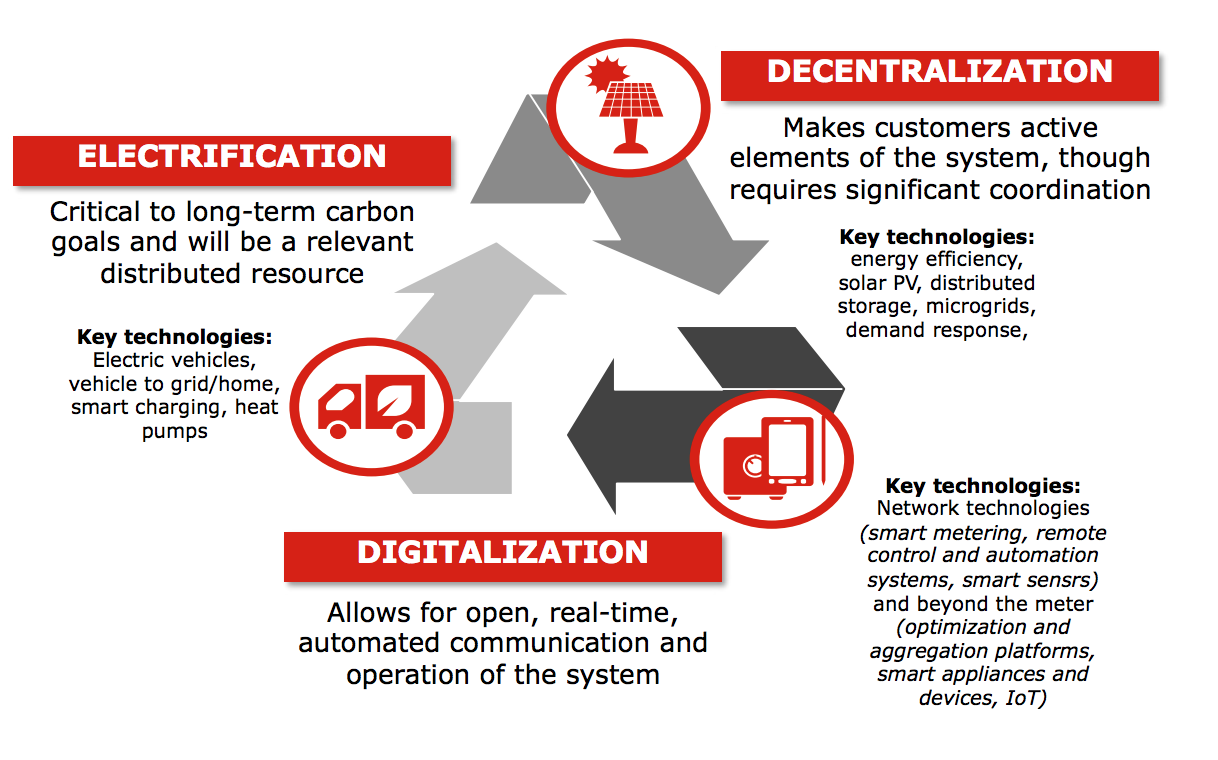 The energy transition in Latin America is yet to gain momentum. Policymakers across the region are looking for avenues to join the so-called ‘grid-edge transformation’, with smart and connected technologies at the end of the electric power grid.

Specific and targeted activities are at early stages: such as electric vehicles in Central America; deployment of advanced metering infrastructure in distressed Brazilian distribution companies; Colombia’s regulatory evolution to accommodate gains in energy efficiency and in renewal energy deployments.

However, the region still lacks an articulated approach that could align generators, utilities, technology entrepreneurs, policymakers, regulators and users towards common goals of effectiveness and competitiveness.

Brazil has already gone a long way in providing electricity access to more than 98% of its population. Despite the fact it already had a relatively large proportion of renewables compared to other countries, it managed to increase the contribution of wind to 8% of the energy mix.

Recent policies – such as net metering – are catalysing investments in solar power plants, a process that is still in its initial phase but that will probably gain momentum in the very near future. There is significant potential of electricity generation from waste biomass sources (from Brazil’s world-leading biofuel and forestry industries) given its unique behaviour as a complementary supply of base load power, which has not yet been leveraged by the power system.

Transformation is not easy in a heavily regulated industry. In Brazil more than 70% of the total electricity required to supply users’ needs is contracted by the distribution companies through long-term power purchase agreements.

The current scenario in Brazil combines grid edge drivers with changes in the electricity network. Despite the high share of hydro-resources (about 60% of total energy generation), significant social and environmental impacts and constraints (especially in the Amazon) are leading to a decreasing use of these large reservoirs in generating electricity.

In addition, the increasing impact and frequency of weather extremes country-wide changes the risk landscape of the power system.

The system urgently requires improvements in hydro and renewable energy generation forecasts to reach a more effective distribution of centralised generation, minimise the generation cost to the system, and maximise reliability and energy security.

In addition, these advances in technology will assist in providing critical inputs to long-range pricing signals, which can enable all players to adapt to the impact of climate change on Brazil’s energy supply and demand.

In 2012, the federal government decided to prepare for the renewal of hydropower plants concessions. This was one among many measures to force a 20% decrease in electricity prices. Contrary to the government’s expectations, some generation companies did not adhere to the proposed terms. Therefore, distribution companies fell short of contracts in their portfolios.

The resulting imbalances had to be settled at the ‘spot market’ at considerably higher prices, due to unfavourable conditions that required costlier and polluting thermal generation.

Currently the government is committed to launching a reform aiming to increase efficiency in the industry. In the process, it acknowledged some of the drivers of the grid edge transformation worldwide.

In an industry driven by economies of scale, the technological innovation resulting from the digitisation of networks inevitably drives attention to a local, decentralised approach. In turn, a rapid digitisation of networks will provide the complex problem sets that technology entrepreneurs in the country and elsewhere love to solve, by creating and scaling their startups.

Considering the rapid reduction in costs of distributed energy resources (DER), production of intermittent renewables and storage, in combination with demand-response systems, may outcompete traditional networks’ economies of scale. In turn, DER technologies may allow companies to consider broadening their scope, that could make the electricity 2.0 transformation even more cost-effective in Brazil.

Policymakers should seize the opportunity to transition from today’s ‘pseudo energy market’ to a real energy market in which players can effectively manage their risks spatially and temporally, paving the way for deploying deeper and wider risk management capabilities and hedging instruments.

There is a consensus that the future will be “electrified”. This means other industries – urban mobility among them – will be severely impacted in the process. Economies of scope are important drivers of efficiency, growth and competitiveness in this new landscape. For instance, distributed storage technology demands an integrated approach; so that batteries for electrical vehicles, for example, can be used to smooth out the intermittent supply from renewable generation.

To unleash an electricity 2.0 grid edge transformation in Brazil, the time is ripe to convene a multi-stakeholder platform in partnership with the World Economic Forum, that includes all segments of the industry, policymakers, regulators, customers, academia and civil society in Brazil, to ensure that the transformation maximises societal value and minimises downside risks.

The views expressed in this article are those of the author alone and not the World Economic Forum.