It’s starting to look like China will lead the world in adoption of plug-in electric cars, but which carmaking nations will follow it?

While electric cars were launched simultaneously in Japan and the United States, Europe lagged somewhat behind. Now, however, Germany—home to the largest piece of Europe’s auto industry—appears to be catching up.

In fact, Germany could rise to become the third-largest market in the world for electric vehicles after China and the United States.That’s the conclusion of a mid-February report by Bloomberg, which opened with an anecdote covering a 2,400-mile road trip from Stuttgart in Germany to the Norwegian capital of Oslo and back again.

It was driven in a Tesla Model S, served entirely by the company’s network of Supercharger DC fast-charging stations along the way. 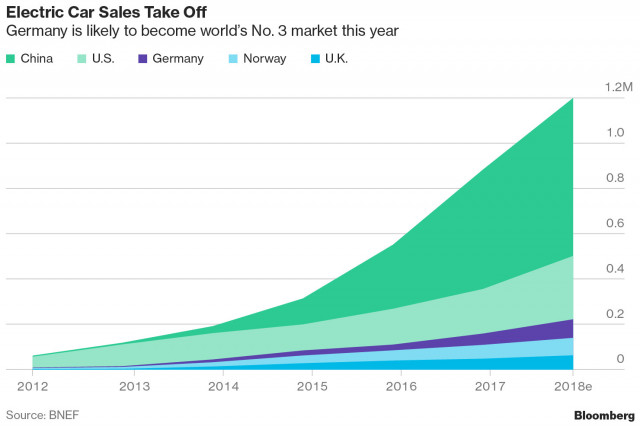 Among the beneficiaries of the sales boom is U.S. electric-car maker Tesla, whose sales success in the U.S. and around the world was a bucket of cold water in the face of the traditional German automakers.

Teslas are now seen on the country’s high-speed autobahns among the the larger, pricier sedans from Audi, BMW, and Mercedes-Benz.

Bloomberg New Energy Finance projects that Germany will surpass Norway in electric-car sales this year, perhaps not surprising given their respective populations of 83 million and 5.2 million.

Norway has long led sales of plug-in vehicles in Europe, with an aggressive program to reduce its vehicular carbon emissions that includes substantial tax cuts and other incentives for the purchase and use of electric cars.

One major factor that has encouraged sales of electric cars is the growing presence of DC fast-charging stations not only on German autobahns but also along highways in adjacent countries, and indeed much of the Continent—led by the 125-kilowatt Tesla Supercharger network.

Already Germany’s population of fast-charging sites is five times as dense as that of the U.S., although North America has huge swaths of very sparsely populated areas that Germany doesn’t.

The German government funded the development of a nationwide fast-charging network several years ago, and the fruits of that funding are now being used by thousands of new electric-car drivers each month.

It’s also worth noting Germany hasn’t put all its green-car eggs in a single basket: It has also funded a nationwide network of hydrogen fueling stations as well, enabling the sale of hydrogen fuel-cell vehicles with no tailpipe emissions as well.

Meanwhile, Audi plans to include 150-kw fast charging on the 2019 Audi e-tron long-range electric SUV it will launch this fall, and Porsche will up the ante with 350-kw “Turbo Charging” on the production version of the Mission E electric sport sedan expected for 2020.

The U.S. has no coherent national plan for comprehensive fast charging, despite the model laid down by the Tesla Supercharger network starting five years ago, and the job is largely being left to private industry.