This article follows up from a widely read earlier article on why a fully electric transportation future is unlikely to arrive any time soon. Battery electric vehicles (BEVs) certainly represent an important wedge in any transportation emissions reduction plan, but they are no holy grail.

BEVs have the same ideological appeal as wind and solar power. They are very easily marketed as perfectly clean and sustainable alternatives with rapid cost reductions that will soon relegate dirty fossil fuels to the dustbin of history. As in the case of wind and solar, this ideological appeal has attracted a broad fan-base and an equally broad range of technology-forcing policies.

Similar to wind and solar, however, the truth is that market penetration beyond a certain, relatively modest, level will require perpetual subsidies. A previous article quantified this point for wind and solar. This article will do the same for BEVs.

All energy technologies have strengths and weaknesses. That is why a healthy mix of technologies is generally the optimal solution, allowing each technology to serve the market segment it suits best.

BEVs have totally different strengths and weaknesses to ICE vehicles, implying that this technology class will diffuse easily into certain market segments, but have a much tougher time in others. Indeed, BEVs will penetrate the mobility market according to the well-known S-curve, struggling not to saturate well below 10% of current oil consumption. 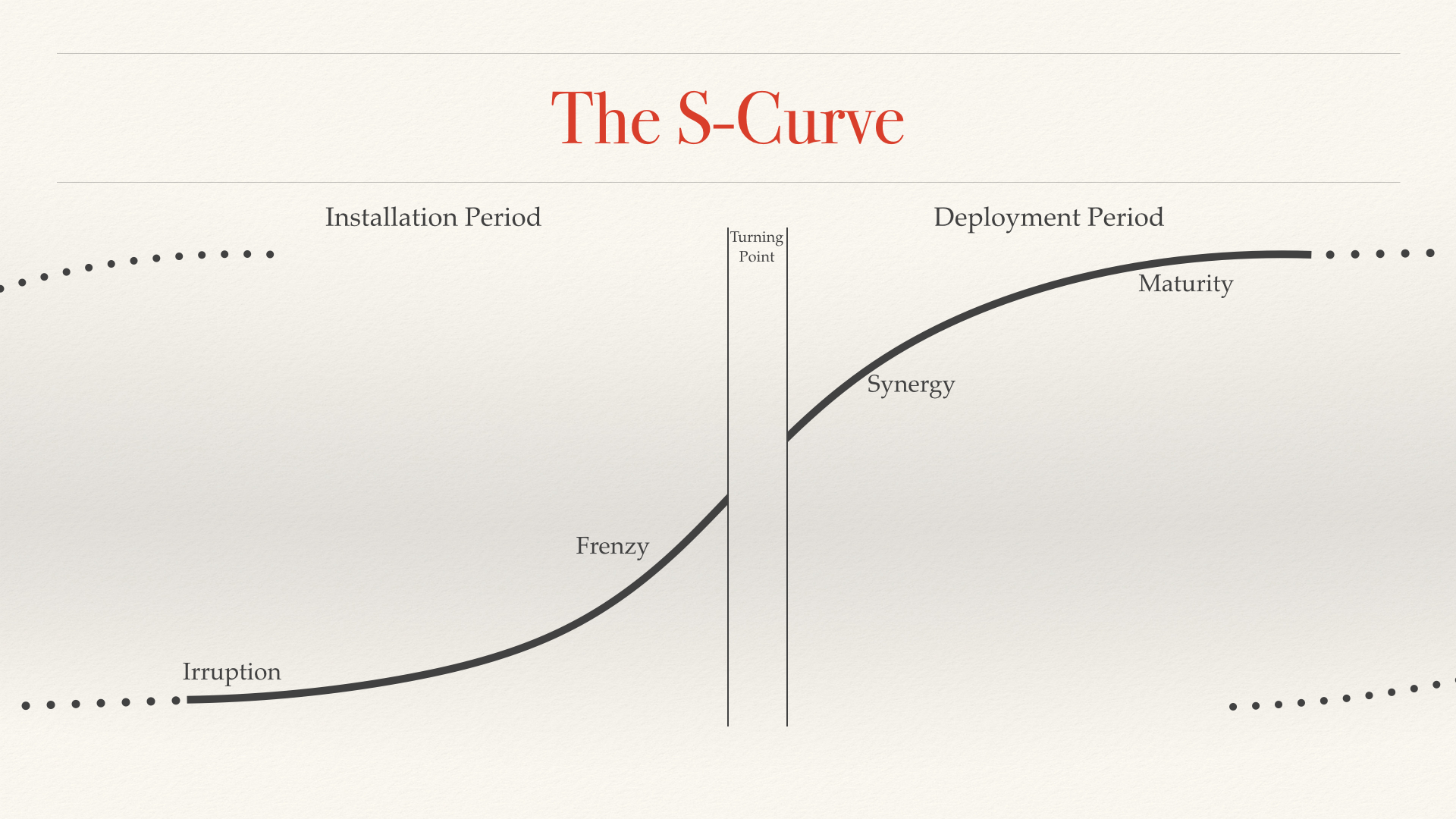 Greater clean mobility contributions will likely come from much less hyped solutions such as car-free lifestyle options, efficiency improvements (including hybrids), sustainable fuels, conservation (downsizing), and fuel cell technology. It is vital that we leave ideology aside and replace current BEV technology-forcing policies with technology-neutral policies creating a level playing field for all clean mobility options.

As an illustrative example, we will calculate the combined fuel and drivetrain costs of a BEV and a hybrid as a function of driving patterns. The following graph shows the assumptions employed. 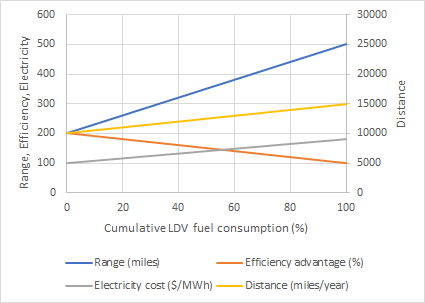 Here we assume that BEVs will be available with ranges between 200 miles (sales below this range have been poor even with large incentives) and 500 miles (comparable to a conventional car). At the low end, BEVs will be used as commuter cars, accumulating 10000 miles per year. At the high end, BEVs are often used for longer trips, racking up 15000 miles per year. Based on fuel economy of the Hyundai Ioniq hybrid and electric versions, BEVs are assumed to be 3x more efficient than hybrids at the low end (primarily city driving) and 2x more efficient at the high end (primarily highway driving).

Three technology improvement levels are assessed for BEVs and hybrids. For BEVs, it is all about battery pack costs over a range of $50/kWh to $150/kWh. For hybrids, a scenario of 50% higher efficiency as well as a scenario of 50% increase in efficiency and power/cost ratio is assessed. The results look as follows: 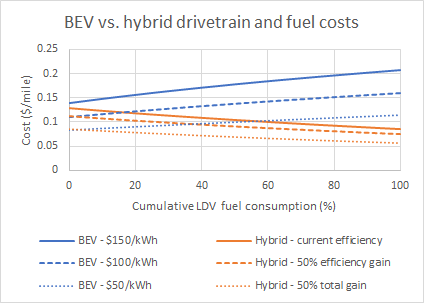 As shown, BEVs just start to become competitive at the low end for the three different levels of technology advancement. Thus, BEV economics are attractive when the required range is small, driving occurs in stop-start city traffic and charging happens at home during off-peak hours. On the other end of the spectrum, BEV costs are generally more than double hybrid costs.

It should also be mentioned that future car-free lifestyle options may well remove a large chunk of demand for shorter city trips where BEVs are at their most attractive. 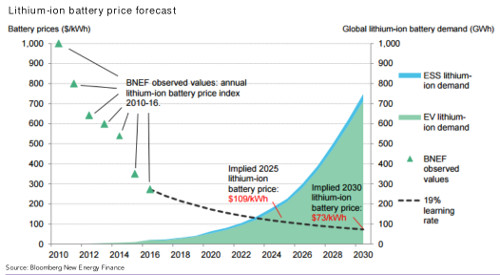 However, lithium ion batteries face harsher physical limits than microchips or PV cells. Even though cumulative battery production will need to increase 1000-fold (10 doublings) from today’s level to displace 10% of oil consumption, lithium ion batteries are already approaching their commercially achievable energy density limits. Recent impressive cost declines were primarily due to the establishment of global value chains and economies of scale, and are not repeatable. Future cost reduction efforts are therefore likely to be hampered by diminishing returns as technology development encounters physical limits.

More importantly, lithium ion batteries rely on several relatively rare technology metals. Given the absolutely enormous scale-up that will be required to have a substantial impact, this potential limitation is getting increased attention. The recent spike in the price of cobalt, a critical technology metal produced primarily in the unstable Democratic Republic of Congo, is shown below as an example. 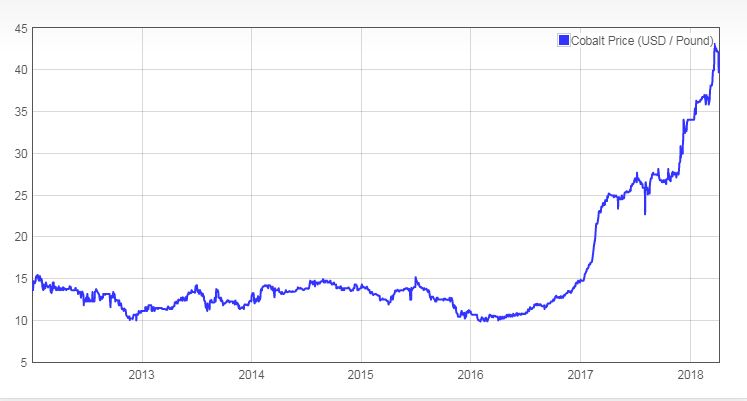 Interestingly, oil offers a very good analogy in this case. At the start of the ICE revolution, oil was very cheap. One simply needed to drill a hole in the right place and oil would just come gushing up. At that point, oil was a minor component of gasoline prices next to refining and distribution costs. This is the point where we are now with BEVs: technology metals are a relatively minor cost in battery packs.

Of course, we all know what happened next. Despite continued technological advancements, oil prices eventually increased 5-fold as demand boomed and the easy resources dried up, making oil the dominant component in gasoline prices. The same is likely to happen with technology metals. At current spot prices, only the raw materials required for Tesla’s battery cathodes already cost $50/kWh. If the oil price history is anything to go by, material costs could really spoil the battery cost reduction story going forward.

As a result of physical limits on technological advancement and technology metal availability, sustainable production of $100/kWh lithium ion battery packs may well be impossible, with even the $150/kWh level proving difficult to maintain at the massive production volumes required to make a significant dent in oil consumption. Of course, oil also offers a good example of the potential geopolitical implications of technology metals.

I am therefore less confident about the optimistic technology assumptions for the BEV than the hybrid in the graph repeated below. Hybrids still have significant headroom for improvements in efficiency and cost, and are much less exposed to battery material limitations due to much smaller battery packs.

As an example, Mazda is targeting 56% thermal efficiency in the longer term for its new SPCCI engine technology illustrated in the video below (current hybrid engines are about 40% efficient). The first generation SPCCI engine is due to enter commercial production next year and beta version test drives have been encouraging (1, 2, 3). Please, see video located at the headline.

As outlined in an earlier article, my view is that such advanced combustion engines will eventually end up in a hybrid configuration where the electric motor is much more powerful than the engine. This will allow the engine and transmission to be strongly downsized, saving costs and allowing for operation within the optimal operating range almost all the time. As a result, efficiency, reliability and longevity will go up, while cost and emissions will go down. A drivetrain cost breakdown from the previous article is repeated below as an example. 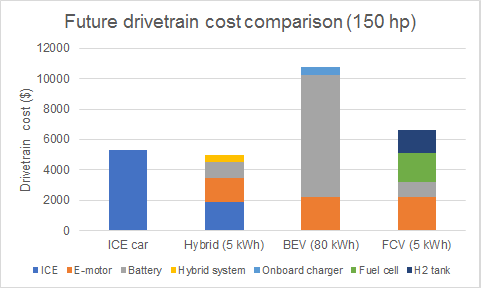 Such a hybrid configuration can conceivably increase overall efficiency by 50% over the current state of the art with no cost penalty relative to conventional ICE cars, thus achieving the most optimistic hybrid technology scenario considered in this study. The most optimistic BEV scenario, on the other hand, will most likely require a new battery technology. If such a technology emerges, it will take 2-3 decades and hundreds of billions of dollars to establish a new fully cost-optimized global value chain and scrap outdated lithium ion battery infrastructure.

The previous article outlined why autonomous driving technology may well favor ICEs more than BEVs. Besides, the competitiveness picture does not change much if we increase the distance traveled per year by a factor of 5, reduce the vehicle lifetime to 7 years and add $2000 for autonomous hardware costs: 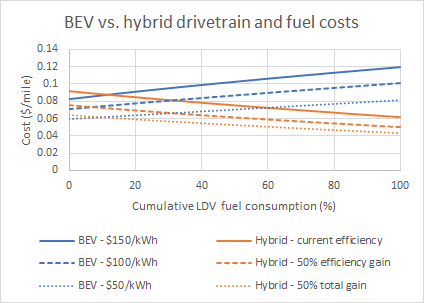 The hybrid will probably perform even better than suggested by the above graph. Autonomous traffic flow will be much smoother, allowing hybrids to also achieve highway efficiency at the low end. Also, such high-utilization applications will encourage developers to further enhance hybrid efficiency through waste-heat recovery systems, thus further reducing fuel costs. The ability of hybrids to refuel very rapidly at any time (without having to worry about electricity price fluctuations) will also be a significant advantage in an autonomous fleet.

That being said though, I maintain that we are unlikely to achieve broad deployment of full autonomy within the timeframes demanded by climate science.

Adding all of these observations together, it is difficult to see BEVs displacing more than 10% of LDV fuel consumption (2% of oil consumption) without perpetual subsidies. Displacing 10% of oil consumption may be possible at a substantial subsidy cost, but pushing beyond that point really sounds increasingly wasteful.

As mentioned earlier, substantially larger cuts in oil consumption and greenhouse gas emissions can be achieved through a range of other channels such as car-free lifestyle options, efficiency improvements (including hybrids), sustainable fuels, conservation (downsizing), and fuel cell technology. It will be a real shame if we get so distracted by BEVs that we fail to harness the great potential of these clean mobility options.